From BitFolk
Jump to navigation Jump to search

Bitcoin is a peer-to-peer payment system and digital currency. 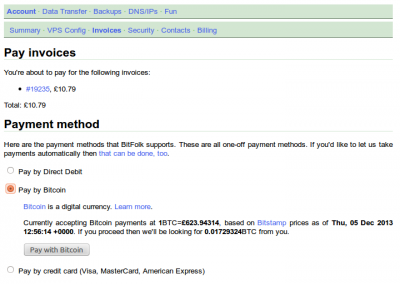 Choosing Bitcoin as a payment method.

From the Panel each invoice has a payment link (multiple invoices can also be bundled together). Billing reminder emails also have a link to the Panel for direct payment. That page allows payment by any of our supported methods, but in this case if you select Bitcoin you'll see something like the image on the right.

The value of a Bitcoin is changing rapidly at the moment so once you click the "Pay with Bitcoin" button a payment address will be generated for that payment alone, and the offered exchange rate will be fixed for an hour or two. After that time you'll get a new exchange rate and a new payment address.

Pay from your Bitcoin wallet 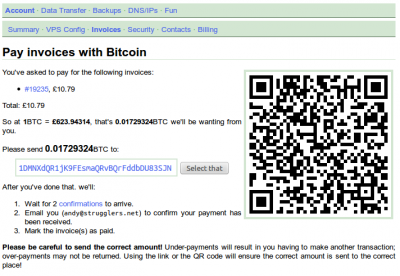 Once you've clicked "Pay with Bitcoin" you'll see something like the page on the right.

This is a reiteration of the rates you've been offered and the Bitcoin payment Bitfolk expects from you.

The easiest thing to do at this point is to scan the QR code into your mobile wallet, since that saves having to type in the 44+ character string that represents the address to pay to. If using a desktop computer then the address is a properly-formed Bitcoin URI so you may be able to just click on it. Failing that, the "Select that" button will at least select the address text so you can copy and paste it into your Bitcoin client.

If you make a part-payment for some reason (please don't!) then you will be able to come back to this page at a later time and get a payment address for the remainder. 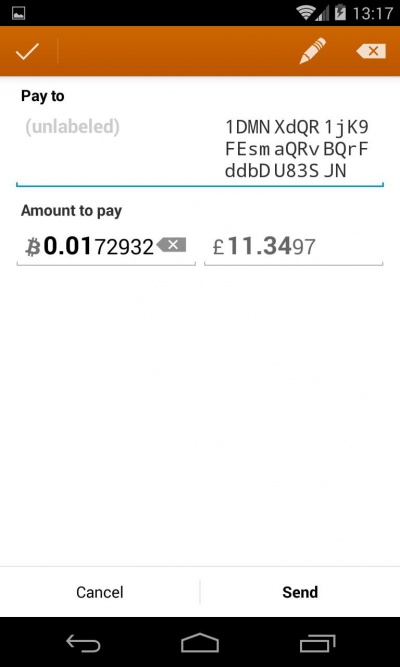 Paying BitFolk from your Android wallet.

An example from the Android Bitcoin wallet application after it has just scanned the above QR code is shown on the right.

Wait for payment to be received and confirmed 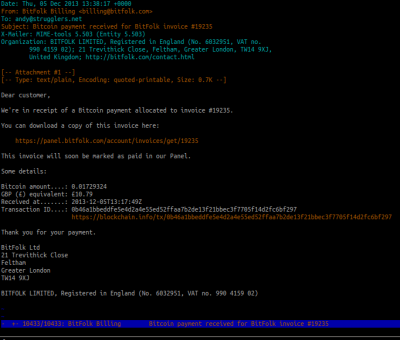 A typical email receipt for a Bitcoin payment.

BitFolk wants to see 2 confirmations before payment will be processed. When 2 confirmations have arrived you should receive an email that looks a bit like the example on the right (assuming you use Mutt, anyway).

This payment was sent at approximately 1310Z, so as you can see it took about 7 minutes to arrive and then around a further 21 minutes to receive two confirmations.

How does this affect VAT?

It doesn't; BitFolk's invoices are all in GBP and have VAT applied if appropriate. You choose to settle an invoice by Bitcoin if you wish, and the VAT invoice shows how much VAT you have paid in GBP.

Can I preload my BitFolk account using Bitcoins now, while they are worth a fortune?

Not trivially, but yes it is possible. You can only pay off existing invoices, but if you contact support then BitFolk will create an invoice that represents a prepayment voucher and then you can pay for it by any supported method. This payment will not be refundable, so can only be used for buying BitFolk services.

If I type in a payment address incorrectly and send Bitcoins into oblivion, what happens?

You will have unfortunately sent some money into oblivion and BitFolk can't help you there. It is suggested that you use the QR code, the payment link or at least the clipboard selection button, rather than type the address in manually.

Is it safe to pay by Bitcoin when there's no chargeback method?

BitFolk's behaviour is still regulated by the usual laws such as contracts, Sale of Goods Act etc. BitFolk does not believe there is anyone out there who has ever felt ripped off as a result of doing business and does not plan to start ripping people off just because there's no way to reverse a Bitcoin transaction. The other payment methods remain available in any case.

Can't I just add a BitFolk Bitcoin address to my address book and send payment to it?

It's generally considered best practice to generate a new Bitcoin address for each transaction, so this is not supported.

If you reuse an address you have previously sent to then BitFolk will still receive the payment but it won't be allocated towards anything in particular. You'll have to ask support to sort it out - which may involve sending you the Bitcoins back and you going through the payment process normally.

How are you working out what a Bitcoin is worth?

Currently using the rates API of Bitstamp, but only updating every so often so as not to make payment processing rely on Bitstamp being available.

Can this be automated so that my regular monthly/quarterly/yearly bill is paid by Bitcoin?

Not presently as we are not aware of any mechanism by which a recipient can "pull" a payment. Presumably if the Bitcoin currency receives more widespread adoption then services will spring up which may allow that sort of thing, but the lack of any chargeback mechanism may prove problematic.

Bitcoins are now worth so much that my BitFolk bill will attract a transaction fee! What do you propose to do about that?

We are sorry to hear of your new-found wealth. We are happy to charge you more. :-)

You could ask support for a prepayment or convert to quarterly/yearly contract.

Which mobile wallets are supported?

Any of them should work but the only one that's been tested in the Android Bitcoin Wallet. The Bitcoin Wiki has some more information about clients.

How dare you promote QR codes?

They seem like a reasonable way to avoid having to type in 44 mixed case alphanumerics, and Bitcoin apps for mobile devices support them.

Why does my client show a different GBP value to the one I've been offered?

Your Bitcoin client probably isn't using Bitstamp as its estimate of the value of Bitcoin, or may be using an older or newer guess - Bitcoin is fluctuating quite rapidly at the moment. If you don't like the rate you can pay at a different time or pay by another means.

Isn't it dangerous to accept payments from anonymous people?

It is, in fact, ironic that Bitcoin is often touted as anonymous. It’s not. Bitcoin is, instead, perhaps the most open and transparent financial instrument the world has ever seen.

As a result it isn't clear that accepting payments by Bitcoin is enabling anonymous payments any more than they were possible before. It may actually be less anonymous than other methods.

It's set up in pretty much the same way as Stephen Early did it for Individual Pubs Ltd., except in Perl and without tills. In particular, Perl modules Finance::Bitcoin and Imager::QRCode were used.